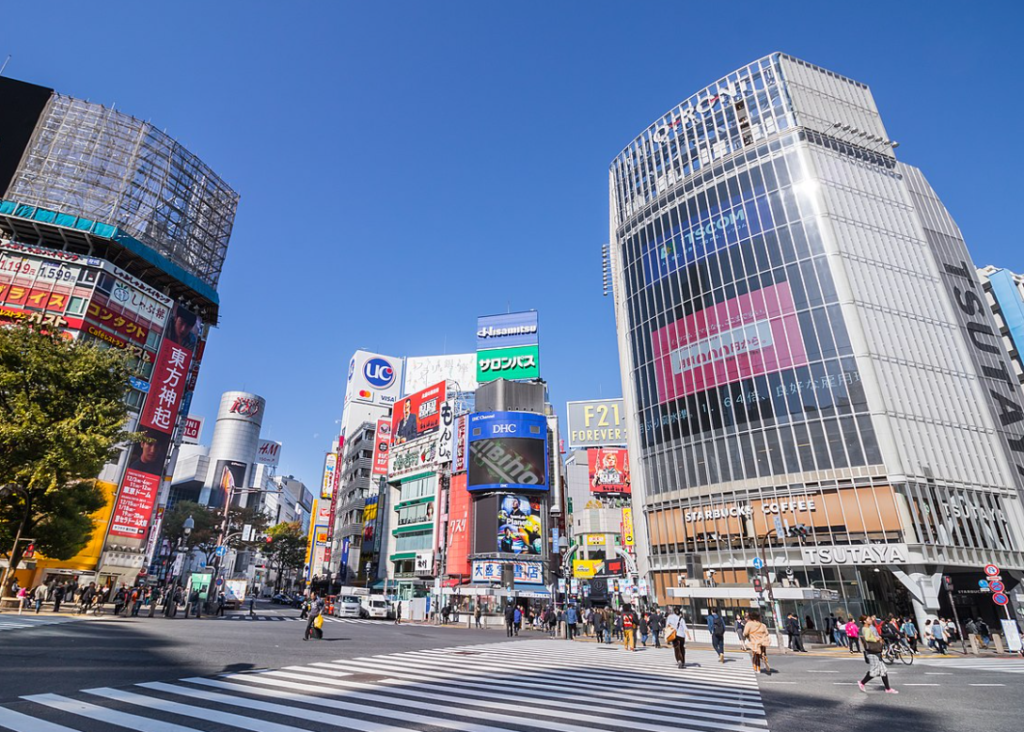 Homat Hill in Aoyama, Homat Olympus in Sendagaya and Homat Rose in Oyama-cho are all in the district of Shibuya.

Oyama-cho and Shimokitazawa are wonderful residential areas with much greenery, each having their own character. TheTokugawa Memorial Museum and the beautiful Turkish Mosque are both located in Oyama-cho.

One stop away on the Odakyu train is Shimokitazawa which has its “Live house”, Jazz bars and many interesting vintage shops and cafes. Someone looking for unique shops, this is the place to be and seen. Many local artists display their items at local Galleries and stores. People refer to this area as ”Shimokita”, a center of the subculture scene since 1970‘s. If you are looking for vintage or second hand clothing, vinyl records this is the place. At one time back in the 50`s and until the early 60’s this was the place where many ” Yami-chi” or Black Market lined the streets with American goods and food.

The Aoyama area is surrounded by Harajuku, Omotesando and Sendagaya. All four places have their own feeling and look, different from each other.

Don’t miss Yoyogi Park, formerly Washington Heights, US Military base and housing complex for the military families from 1946-1962 covering an area of around 924,000 sqm. Now, Yoyogi Park, NHK Broadcasting and the 2 Olympic stadiums used in the 1964 Summer Olympics. The park is frequented by many either having a picnic or just walking their dog. They have kept all the beautiful cherry trees from before, a great spot during the cherry blossom season. Just on the other side of the park is an open area with a small stage where almost every weekend is used for events such as the Thai Food festival or introducing various prefectures of Japan with their food and culture. Next to this area is the National Yoyogi Arena Futsal court.

Right at the entrance to the park right by the beautiful bridge ( Jingubashi ) is the entrance to the Imperial Family Shrine; Meiji Jingu ( Shinto Shrine ) established in 1920 and completed in 1926 using Japanese cypress and copper. The main shrine that was destroyed during the Tokyo air raid of WW2 and rebuilt in 1958. Open to the public from 5 AM to 6 PM. Passing the wood Torii gate walk on the pebble path will take you along 2 private gardens, just before the main area on the left side facing the main shrine is where the Miko Priestess station is located. You may see the priestess wearing her white kosode and red hakama, her hair in a ponytail with a red/white ribbon. You will then reach the main part of the shrine called the ”Kaguraden”. You may be lucky to witness a traditional Japanese wedding and the procession.

Along Omotesando, Champs-elysees of Tokyo, elegant shops line the streets. “Cat Street” off the main road is the home to trendy, offbeat shops and restaurants, and cafes. Don’t forget to browse inside Oriental Bazaar, Japanese souvenir shop that carries a variety of items, good for presents. You may be surprised with their good selection of antique furniture and porcelain.

Takeshita Dori, from Gothic to Lolita look, wacky socks, popcorn handbags, anything you have ever imagined, you will probably be able to find. Looking for some fun photo shots, try the “Purikura” photo booth. There are several pet cafes, such as Cat, Owl, Hedgehog, and MameShiba Cafes, lining the streets at Takeshita Dori.

Sendagaya, surrounded by Shibuya and Shinjuku, around the corner from the main street where the station stands is the new National Olympic Stadium by architect Kuma Kengo, holding a capacity of 80,000 spectators. He is known to gather wood from all over Japan to build the new stadium. Located opposite of the main entrance is the Meiji Jingu Gaien Ice Skating Rink. Open to the public, as well as professional skating lessons can be taken. There are times where the International Ice Hockey has their matches.

Sendagaya is also known for clothing and accessory workshops and fashion related agencies. Culturally very active with the National Noh Theater, Tsuda Hall for Music and many other theaters and cultural organizations. Hato No Mori Hachiman Shrine is a welcoming scene with many red wood torii gates.
Chichibunomiya Rugby Stadium, Metropolitan Gymnasium Futsal Courts, the public tennis courts inside the Jingu Gaien park. The Jingu Gaien Golf Driving Range is open daily from 6am to 11pm. Next door is the Yakult Swallows Professional baseball league which has its home grounds. Stadium is frequently used for high school teams and during the end of August there is a firework display which can be seen from miles away. Another attraction is the NikonikoPark for children. A beautiful sight is during the autumn along the Outer Gardens where you can walk along the Gingko nut tree street when the leaves have turned its color to golden yellow. Head over straight ahead is the Meiji Memorial Picture Gallery where you can experience some Japanese arts and culture. Take a walk on Route 246 or Aoyama dori head towards Shibuya, pass the Omotesando crossing you will pass by Aoyama Gakuen, private school ranging from kindergarten to University, the UN University which on weekend hosts on their grounds an Organic Marche, a gathering of many local organic growers selling their produce and wonderful food trucks.

Pass this area of Aoyama Dori and you will come down to the Shibuya Scramble Crossing. Home for many department stores, large new buildings such as the Scramble Center, Hikarie, and the Tokyu Plaza.
Some nostalgia, 1951-1953 there was a Ropeway called the “Hibarigo” traveling with passengers from one department store rooftop to another, underneath on the streets were street cars, ( Toden ) now the walking hub, hard to believe all this existed not too long ago. Where Hikarie stands was once called Bunka Kaikan, on the rooftop a very popular Planetarium from 1957 till 2001, very popular among children and adults. Presently there are around 22 planetariums in the Tokyo area.
Spending the entire day in the Shibuya area will never be boring.