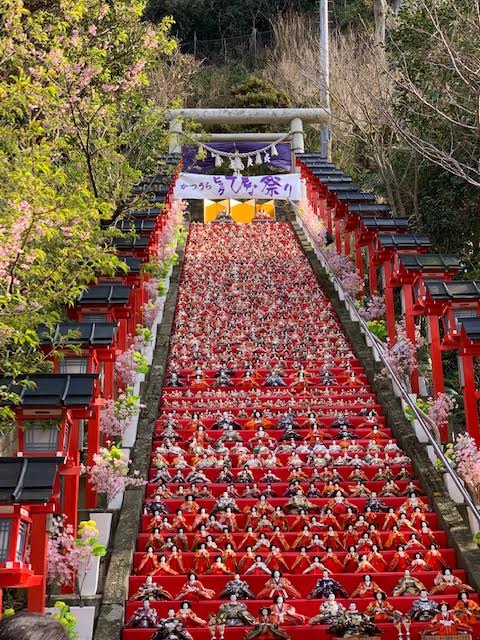 Hinamatsuri or Dolls Day/Girls Day, is a religious holiday in Japan, celebrated in various ways depending on the prefecture and areas. Every year on March 3rd, families with young girls celebrate by placing either their grandparents’ dolls that were passed down by generations or newly bought ones are displayed on a red carpet on either steps or just a flat surface depending on how many dolls you own. Starting with the Emperor and Empress, their attendants, musicians, dressed in traditional court attire of the Heian Period.

Origin is not very clear but the displaying of dolls came with the Peach Festival around mid 1600. Hinamatsuri became the official name in 1687 when Empress Meisho succeeded to the throne. Many of the original dolls were very large and made out of anything from paper to porcelain.

During the Meiji Period with modernization and the Emperor was restored, it seemed that the tradition would fade out but regain its popularity as the Emperor focused on marriage and families, with Japanese hopes and values. The representation of the Emperor and Empress, fostering respect to the Imperial Family.

Depending on the family and prefecture the display could be very elaborate and gorgeous.

You will find the displays of dolls at Asakusabashi where many of the doll making shops are located. Or go to Katsuura in Chiba and view the enormous collection of dolls on the 60 steps of Tomisaki Jinja Shrine, around 1500 dolls are displayed from Feb.25 till March 3.

Enjoy the celebration with the entire family even if you only have boys in the house.